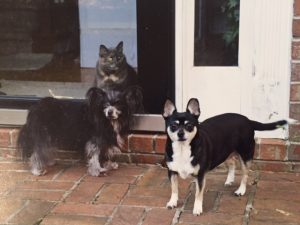 Cali has been the Big Momma Bear watching over the pups for so long.  Here she is making sure Klunkers and Libby come back inside.  Klunkers was always very methodical about taking care of business quickly then coming to the porch to be the first to be let indoors.  It was rare for him to ever just sit in the sun or wander in the yard.  Libby could entertain herself in the yard as long as we’d let her stay.  She would take her tennis balls into the yard and of course they were fun for her because our house is on a hill. The game of fetch was automatic as soon as she dropped the ball it would start rolling.  She was very talented at seeing the possibilities for fun.  She was also afraid of jets flying overhead, packages sitting on the front porch and other random things so we never knew when she would be skittish about something that would make her run for the door to join Klunkers. 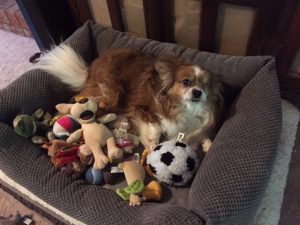 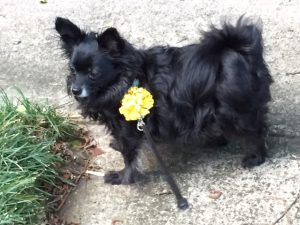 Polly in her blue harness with yellow flowers.  She’s adorable in anything really! 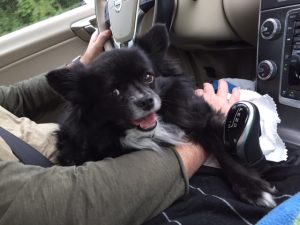 This Daddy’s Boy has a big grin on his face every time he spends time with his Pops.  It’s really cute to witness it. 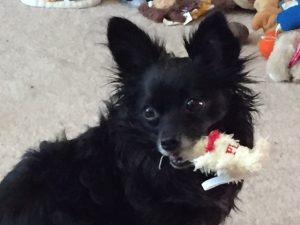 This is Polly and one of her favorite toys, the Flea.  We also bought her the toy Tick.  Sounds creepy to have toys like the two things we don’t want around our kids, but she loves all the tiny toys and these fit the bill perfectly.  If you say Fleeeeeeeeeeeeea to her she will bounce around the living room waiting for you to throw this Flea to her.  She will share the Tick with her siblings but not Flea. 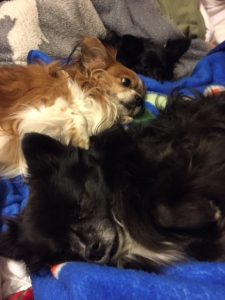 Where one kid goes, the others are not too far away. 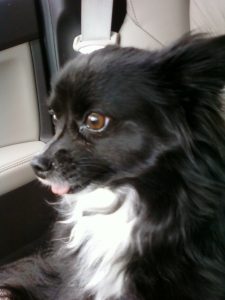 This is Fletch coming home from his first teeth cleaning after we adopted him.  He definitely looks like he is on drugs here.  It’s common to see humans like this after dental surgery but it’s strange to think about our kids going through that too.  Fletch does not have a poker face at all. When he’s on drugs, he looks like it! 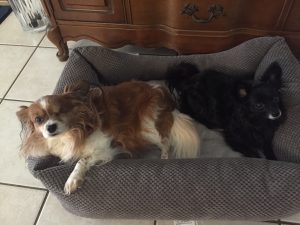 This is Bates and Polly parked in their bed that is packed and next to the door at Nana’s.  They want to make sure we don’t forget to pack them for the trip home too.  There’s no chance we could ever forget them! 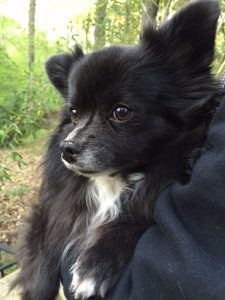 This day Fletch was around to help us plan the new garden in our backyard. 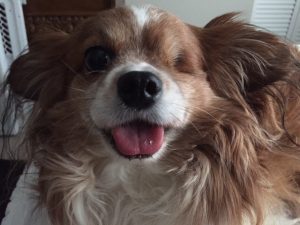 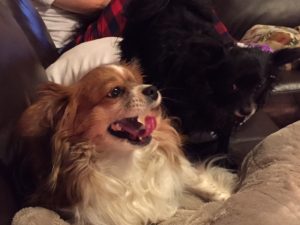 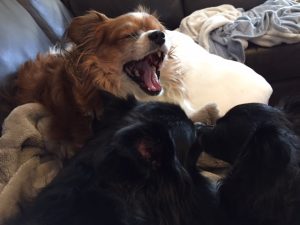 Bates has 8 teeth in his mouth.  Total.  He came to us with 20.  He had 12 removed in January.  Our vet explained that once a mouth gets beyond bad breath, a process begins that you cannot stop in humans or pets.  The bacteria release enzymes that detach the roots of the teeth from the jaw.  Bates had several teeth removed before we adopted him.  He had no teeth from canine to canine in the front and was missing a few on the side.  Now he only has 4 teeth in the back and 4 canines in the front.  Thankfully the 4 in the back are divided between two pairs, one on each side, directly above each other so he can at least chew or bite if he needs to do so.  Once the 12 teeth came out we put him on wet food.  He still can eat dry food.  Just ask Cali!  He tries to steal her food every chance he gets.  Our vet said the teeth are what hold the tongue in his mouth.  You can tell the age of his photos now because his tongue sticks out more since the 12 teeth came out.  He makes little bubbles on his tongue like the first pic and he slobbers a bit once multiple bubbles build up.